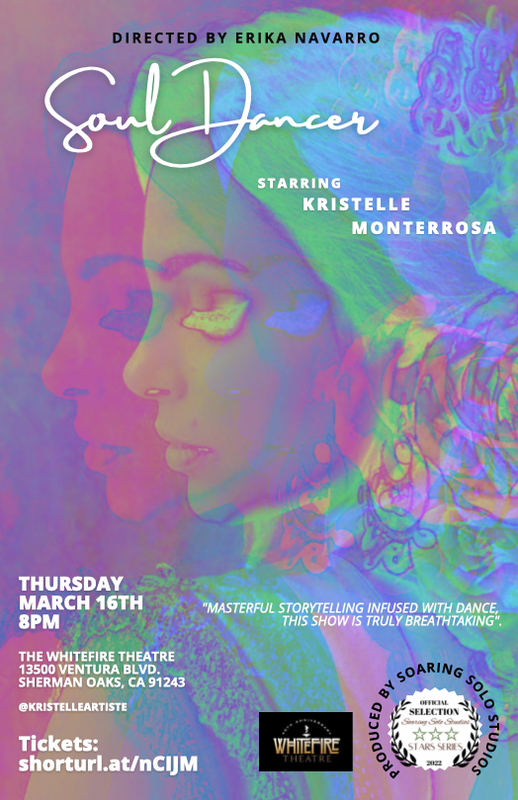 Years later, Kristelle suffers a devastating knee injury that leads to a new adventure with Alicia, which then rocks their relationship to the core… for just as in dance, only one can lead.

Through the lens of Kristelle’s flamenco journey, (including live flamenco guitar) we’re reminded that what makes our soul dance is unique to each of us… and ours to create.

Created, Written and Performed by – Kristelle Monterrosa
Kristelle is a multicultural actress, dancer, award winning producer and choreographer. Loving the stage since age 6, Kristelle has performed hundreds of shows worldwide at venues such as The Nokia Theater at LA LIVE with Mario Reyes from The Gipsy Kings, The Broad Stage in Ferdinand The Bull in Santa Monica, CA, and The Morgan Stock Stage in Monterey, CA. As an actress she’s starred in the award winning plays, Femmes A Tragedy and Sideways The Play and performed forty shows at The Hollywood Bowl for the LA PHIL, Summer Sounds program.
On television and digital media, she’s been the face of multiple national brands and has starred in several award winning short films. Producing the award-winning tango and modern dance show, Medea Tango, in Buenos Aires Argentina, ignited her love for production. Kristelle also hosts monthly manifestation circles cycled with the moon, it makes her come alive to watch her community aim for their greatest wishes and make them come true, one step at a time. Kristelle is also an immigrant child advocate when her schedule allows, supporting children that are currently navigating the US immigration system.

D﻿irector – Erika Navarro
Erika Navarro is a writer and director who has dedicated her life to the art of storytelling. Currently, she is in production on her first feature documentary, Run Away Amy, and in post production on her latest short film, Divine Mother. Erika has directed multiple short films, a web series, and a pilot for a half-hour variety show. In addition to having sold a children’s comedy pilot to Amazon Studios, she has written and developed long-form projects for companies like Universal Cable Productions, Denver & Delilah, and Team Todd. From 2010-2015, Erika founded and ran femme-driven digital studio, Comediva, building an audience to the tune of 3M+ monthly views at its peak and producing more than 300 original comedy videos featured in outlets like Good Morning America, The New York Times, The Today Show, CNN, and countless more, as well as original content for companies such as Univision and Nickelodeon. Erika holds an MFA in Screenwriting from the USC School of Cinematic Arts and joined the Writer’s Guild of America in 2016.

G﻿uitarist – Marco Antonio Torres
Marco Antonio Torres is a guitarist, performing throughout the United States, Spain, and Latin America. Born in East Los Angeles, Marco was influenced from a young age by various styles of music such as Classical, Rock, Jazz, Mexican folk music, etc… and began to play guitar at the age of 12. He has studied with masters of the flamenco guitar such as: Yago Santos, El Viejin, Ramon Jimenez, Emilio “Cara Cafe”, David Marin, Adam del Monte, etc., in the USA and in Spain while living there. His dedication and natural affinity for flamenco guitar has led him to perform in Spain, Mexico and Southern California’s most noted venues, tablaos, etc. With local artists and from Spain such as Juana Amaya."

Producer – Jessica Lynn Johnson
Jessica Lynn Johnson, recipient of BEST NATIONAL SOLO ARTIST AWARD, is the Founder & CEO of Soaring Solo LLC, a company dedicated solely to the Direction & Development of one person plays. Jessica is passionate about the transformational power of solo theatre and has aided in the creation of over 100 solo shows (and still going strong)! As a published playwright and performer, Jessica has “edu-tained” international audiences touring her own 25 character one person shows ZE and OBLIVIOUS TO EVERYONE for over 13 years.