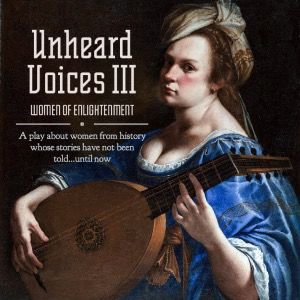 Unheard Voices is a series of monologue plays based on historical women whose names you may know but whose stories have not been told. This installment features Baroque painter Artemisia Gentileschi. Born into an artistic family, Artemisia was raped at 17 by one of her father’s colleagues. A sensational trial followed in which her assailant was convicted but served only eight months. Artemisia went on to become one of the most reputable painters of her age, patronized by the Medici Family, creating a substantial body of work. Next is Elizabeth Griscom Claypoole, better known as Betsey Ross. Born in Philadelphia, Betsey married outside her faith for love and was shunned by her family. Only two years later her husband was killed and Betsey survived by sewing uniforms, tents and flags for the Continental Army. She went on to marry two more times and serve as a spy for George Washington. Lastly, Sally Hemings. Born a slave, she was half-sister to Thomas Jefferson’s wife. After Martha Jefferson died, Sally became Jefferson’s mistress and bore him six children. The details of their lives omitted from history books, these women will finally tell their own stories.