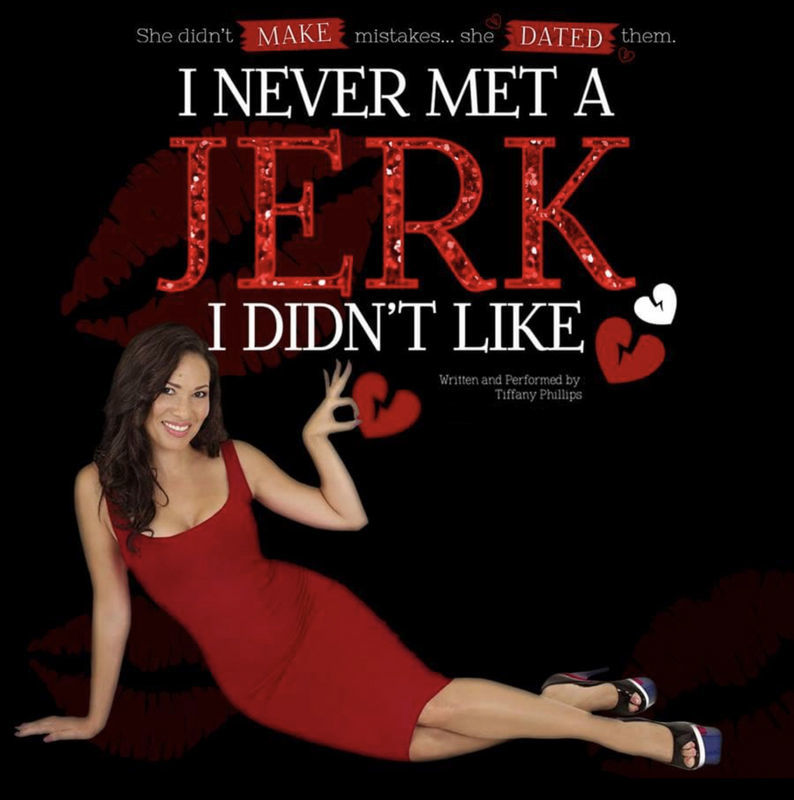 The critically acclaimed show I Never Met a Jerk I Didn’t Like is an unabashed everywoman’s referendum on dating in the 21st Century. Its World Premiere opened in February 2013 to a record-breaking, highest-grossing sold-out solo show in the Los Angeles Whitefire Theater’s 30-year history. The show then sold out every performance at the Hollywood Fringe Festival and was rated #3 on LA Weekly’s “Top 10 Shows to see at the Fringe.” During the Fringe Festival run, I Never Met a Jerk I Didn’t Like was selected among entries from all over the world to be part of the prestigious United Solofest in New York on Theatre Row. The show was a smash hit and sold out the Off-Broadway house and was voted the: "Audience Favorite” at the United Solofest.

Tiffany Phillips’ show invites us on her personal roller coaster ride through the minefield of modern dating and love. Her tour de force performance will make you laugh, might make you cry and it will definitely make you think. The show takes the audience on a comical journey through the jerk-magnet phase in a woman’s life—a topic most contemporary women (and even men) can relate to. They say, “bad decisions make good stories” —especially true in this case. You’ll meet the jerks and other oddly entertaining types along the way. Get into the mind of women who shun the good guy while chasing after the bad boy and the epiphanies that ensue after having their heart stomped on one too many times. Jerk is hilarious, outrageous, heartfelt, inspiring, empowering, and highly engrossing.

“In a performance that echoes the physical and vocal transformations of Anna Deavere Smith, Phillips manages to tell a story that is personal, entertaining, and cathartic.”
— Holly Derr, Ms Magazine

“Phillips exudes such honesty and approachability, I actually felt as if I could go on stage and give Tiffany a hug. The talent spurring forth through comic timing, singing, caricature, and storytelling showcased Phillips’ many talents with a memorable story to boot.”
- Sheana Ochoa, SLAM